A lot of new and interesting IPTV boxes have been released over the past couple of years. It’s gotten to the point where it can be difficult to keep up with all these new products, let alone find the time to single out the best ones. Luckily for anyone who is feeling overwhelmed, I’ve got you covered with detailed reviews of the most popular options.

I recently got my hands on the all-new BuzzTV XR 4000, the updated version of the older Buzz TV XPL 3000. I was very curious to see what improvements were made so I toyed around with it for a while to learn all its nooks and crannies.

That’s why I am excited to share with you my in-depth review of the new BuzzTV XR 4000 IPTV box. I’ll let you know all about its specs, how it performs, and whether or not it is a top choice for IPTV boxes in 2019 and a serious alternative to the fantastic Formuler Z8.

BuzzTV made a lot of very intriguing promises about what the new XR 4000 can do that wasn’t previously found on the XPL 3000. For one thing, the XR 4000 is said to have twice the improved system performance over the XPL 3000, as well as the inclusion of Android 9.0 instead of 6.0. 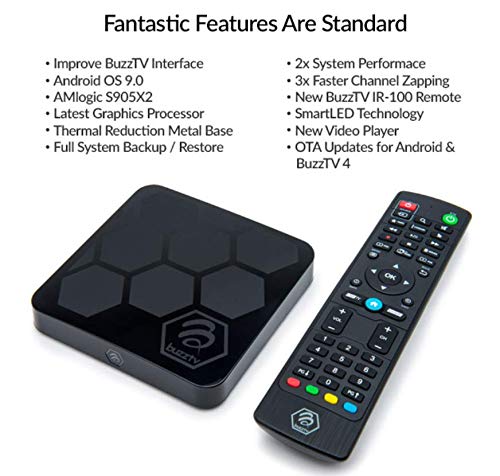 The XR 4000 also comes with a new and improved remote control that has more buttons for more one-push shortcut inputs. Additionally, and very importantly, the new XR 4000 has an improved graphics processor that is designed to handle better picture quality designed for 4K resolution images.

When it comes to storage the new model has twice the internal memory of its predecessor with 16gb instead of only 8gb. Both models have 2gb of RAM but it is important to note that the XPL 3000 was using DDR3 RAM while the XR 4000 uses DDR4 RAM, which is considerably faster and more efficient.

The XR 4000 also has an improved UI thanks to the use of Android 9.0. This should make navigation and optimization much more up to date for superior performance.

While the XR 4000 certainly shines when looking at its stats on paper, we should note that BuzzTV has another model with even better specs. This model is called the BuzzTV XRS 4000 which is very similar to the XR 4000 except for having double the RAM and internal memory. This model has identical graphics processing but has better performance for those who are interested.

The first thing I noticed when I took the BuzzTV XR 4000 out of the box was that unlike the XPL 3000, this model didn’t have an external antenna. This initially worried me as IPTV boxes with internal antennas typically have weaker wi-fi signals but I still decided to keep an open mind.

I was impressed by the quality of the new IR-100 remote control which certainly has a lot more buttons than your average IPTV remote. Not only that but the remote itself simply looked sleeker and felt like it was made out of sturdier materials. 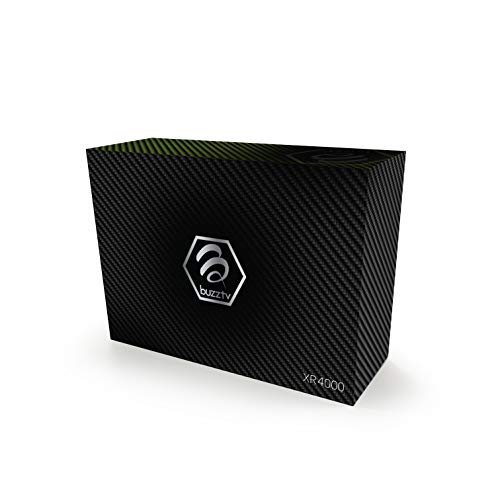 The packaging overall was quite nicely done as all the separate components, such as the HDMI cable and power source, were neatly stored inside their own separate cardboard boxes. The instructions manual was nicely created with a colorful legend to help explain the function of each button on the remote control.

The XR 4000 box itself looks quite nice but is ultimately no different than many other IPTV boxes on the market. The device itself weighs roughly one and a half pounds, features two USB ports, an HDMI port, a micro SD slot and of course the power source slot and a LAN cable port. All of the usual suspects are here.

The underside of the box is loaded with ventilation holes to keep the machine cool during operation.

Installation was quite easy and I personally experienced no hiccups when setting up the XR 4000. It connects to the internet very easily, regardless of whether you are using a wireless or wired setup.

When the XR 4000 is booted up I was immediately greeted by a quick loading screen displaying the logo, followed by the main menu which was quite different looking from the older XPL 3000. BuzzTV definitely made some major UI renovations here.

The XR 4000 has more icons on screen but it is neatly organized and therefore quite easy to navigate. Important apps like Youtube, Google Chrome or the Google Play Store are right on the home page along with the main applications such as Live TV, VOD, PVR and the Electronic Programming guide (EPG) for your IPTV service thanks to the updated BuzzTV 3.0 Platform.

When it comes to picture quality, the BuzzTV XR 4000 definitely impressed me. It looked great at 1080p or at 4K with HDR. Action-packed movies with a lot of CGI effects really looked better on this box compared to the XPL 3000 thanks to the new graphics processor. Any scene that had a lot of color or lighting going on really shined vibrantly on this box.

Even more impressive was the sheer speed of the XR 4000. Some people may be turned off by the fact that it only has 2gb of RAM, but don’t let that fool you. The XR 4000 is one of the fastest IPTV boxes I’ve ever used.

Browsing through VOD and EPG menus is amazingly fast. The combination of Android OS 9.0 and DDR4 RAM is really working here because I can’t remember a single time I felt like I was losing my patience while using this box. 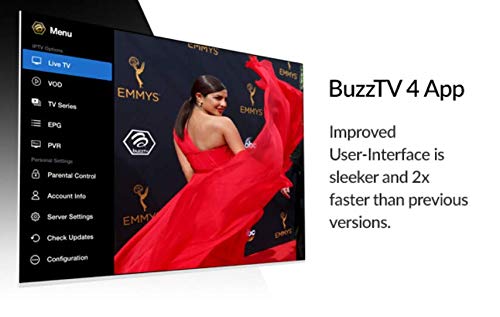 One thing you need to know is that the XR 4000 streams IPTV natively using the Buzz TV app. This is a built-in live TV proprietary app similar to what Formuler uses for their own IPTV boxes. You don’t have to worry about being limited to this setup though. Up to 10 third-party servers can be paired with the BuzzTV streams so that you can add whatever IPTV streaming subscriptions you prefer.

What might actually be my favorite aspect of the BuzzTV XR 4000 isn’t its swift loading or how it handles HDR and 4K, but the sheer amount of bonus functions it possesses. Normally an IPTV box has extra features that seem like tacked on functions with little use or value. But here the XR 4000 has several quality features that I found myself either using frequently or thinking to myself how smart of a decision it was for BuzzTV to include.

The XR 4000 has a Backup and Restore feature so that you can save your data or content if you ever decide to get a replacement or switch to a new box, like the XRS 4000. This is a great insurance feature that makes the transition to a new IPTV box easy.

I was even allowed to customize how the XR 4000 boots up and powers off. In the Settings menu, you can set the XR 4000 to turn off when you turn off your TV itself. You can also set it to bring you to either the main menu, the EPG, the Live TV or the Channel List by default every time you turn it on. This prevented me from having to scroll through menus every time I turned it on and it really felt like I had a lot more freedom when using this box.

I also loved the customization that was found within the EPG and Live TV settings. Adding or removing channels from your Favorites playlist is easy, but there’s also a huge amount of categories that you can enable or disable based on your preferences while browsing. It allows you to file categories corresponding to regional location. 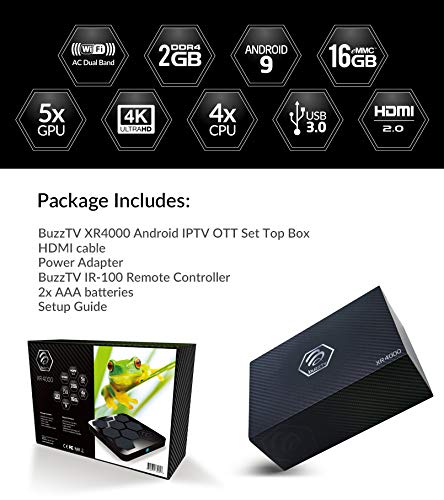 While I am seriously impressed by a lot of what the XR 4000 has to offer, it, unfortunately, isn’t perfect. While using it via a LAN cable worked excellently, I had a few hiccups with a wireless setup. They weren’t happening frequently but it was still a noticeable downgrade compared to a wired connection. I can only assume that the lack of an external antenna is to blame for this. I can’t say I had many internet hiccups when using 720p or 1080p, but they definitely occurred when I was checking out Youtube videos with a 4K resolution.

While it may not be perfect, in my honest opinion it comes pretty close. I wasn’t that impressed by the XPL 3000 but BuzzTV really blew me away with the XR 4000. Many IPTV box manufactures will simply release a new model that has a little more storage or slightly better RAM, but BuzzTV really pulled out the stops on this one and invested a lot of time improving the software.

The UI is simply awesome. I found myself using the extra features on a regular basis, the picture quality was great and the speed of this thing was just excellent. It may not have perfect wi-fi reception but it’s still pretty solid, and results will vary based on things like your router or your ISP plan.

The bottom line is that if you want an IPTV box that is great for 4K, has an excellent user interface, and is extremely fast then the BuzzTV XR 4000 would be a top-notch choice. I am still in awe over how much of an improvement this is over past BuzzTV products and I’m sure that you’ll feel the same way. This is definitely a viable alternative to the excellent Formuler Z8!

Last update on 2020-01-27 at 21:45 / Affiliate links / Images from Amazon Product Advertising API. As an Amazon Associate I earn from qualifying purchases.